How And Why Should U Go For Node.js As Your Backend 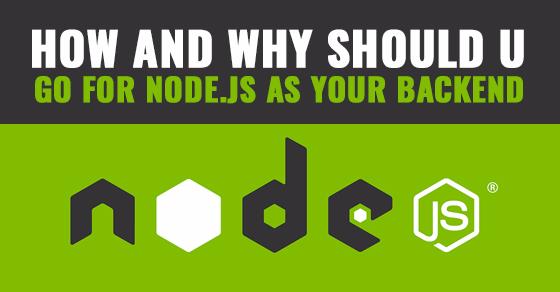 Node.js is a lean, fast cross-platform application runtime environment that allows you to server-side applications built on Chrome's V8 JavaScript engine. Actually, 98% of tech giants like PayPal, LinkedIn, Netflix, Airbnb, Walmart, Uber, and even NASA uses Node.js. And of course, smaller tech startups have built their platforms using Node.js and increasingly more enterprise companies are migrating their platforms from legacy code to the more robust and streamlined Node.

As Wikipedia states: “Node.js is a packaged compilation of Google’s V8 JavaScript engine, the libuv platform abstraction layer, and a core library, which is itself primarily written in JavaScript.” Beyond that, Ryan Dahl, the inventor of Node.js, was aiming to devise a system for building websites with real-time push capability "inspired by applications like Gmail". In short, event-driven programming is the heart of Node. That is, Node.js is a programming tool for working in the non-blocking to make 2-way connection websites (client and server) with free data exchange, unlike the previous “request/response" programming.

Node.js is a JavaScript runtime environment that enables data streaming in real time which is advantageous for developers to create additional features, while also reducing complete processing time. And it’s an ideal backend framework if you’re developing real-time applications such as chats or using programs that need event-based servers or even non-block servers.

Node.js comes with the Node Package Manager that includes a repository of 50,000 packages, essential for creating a variety of effective solutions, while also updating, sharing or reusing codes with other developers. Another highlight of Node.js gets things done in a matter of seconds as it’s written in JavaScript and built on the powerful V8 engine by Google, also increase any other framework’s speed as well.

How Is Node.js different?

Node.js is a server-side engine for running JavaScript, the same language your front-end web developers already know. In fact, the company itself describes Node as a “JavaScript runtime built on Chrome V8 engine”. So, there is no difference in terms of the language used between web JavaScript and Node.js. JavaScript used in browsers and in Node.js is almost exactly the same. It is fast due to Google innovative technologies and the event loop and has the ability to keep data in native JSON (object notation) format in your database.

What makes Node.js unique is the different set of APIs. In browsers, you have a variety of DOM/Web APIs exposed that help you interact with UI, and allow you to access the hardware to a limited extent. Node.js is different as it comes with many APIs suitable for backend development, for instance, the support for file systems, HTTP requests, streams and child processes etc. Because of security concerns, support for file systems or HTTP requests is limited even though the browsers offer the same. In Node, JavaScript isn't yet, in addition, allows work away from the browser.

While there is a wide scope of backend change development out there, including any preferences of Zend, Python, Symfony, and Lumen, Node.js stands out among the rest. Node.js isn't just a framework, it is a complete JavaScript environment, equipped with all the tools a developer may require.

The two imperative things that make Node.js development different to existing server-side frameworks is the use of JavaScript as a programming language and event-driven I/O. The reason behind Node.js is to utilize non-blocking and event-driven I/O so it stays lightweight and productive against real-time applications, even with a lot of information running on conveyed gadgets. It outshines other web applications by replacing websockets with revolutionary push technology. It is basically an application that empowers ongoing two-way connections, where both the client and server can initiate communication, allowing them to exchange data freely.

A repository that frees up time by taking out the requirement for composing tedious code is fundamental for an incredible framework. One way that Node manages this issue is NPM, which gives developers access to 550+ modules. The built-in support for package management using the NPM tool that comes as a matter, of course with every Node.js installation reduces the time and effort for the install to facilitate operations at the backend.

Yet with Node.js you don't have the issue with hosting as it is independent of the working of the application. It can be hosted almost anyplace and wherever including a few cloud-based hosting providers and web servers. It's nothing unexpected, in this way, that corporate giants, for example, Amazon and Google have adopted it so well. Another key advantage of Node.js is the easiness for developers to find and fix bugs as soon as possible along with enhanced security.

Node.js isn't flawless, yet it is an extraordinary tool for building server-side web applications in JavaScript. It is continually developing and extending its utilization, and generally easy to get into while adequate to deal with the present web development projects. It is a fine cost-proficient and asset productive framework for building websites, APIs for web/mobile integration, and independent programming.